SEVERE GEOMAGNETIC STORM IN PROGRESS: A severe G4-class geomagnetic storm is in progress on June 22nd. This follows a series of rapid-fire CME strikes to Earth’s magnetic field during the past 24 hours. Magnetic fields in the wake of the latest CME are strongly coupled to Earth’s own magnetic field. This is a condition that could sustain the geomagnetic storm for many hours to come. High- and mid-latitude sky watchers should be alert for auroras tonight, especially during the hours around local midnight. Aurora alerts: text, voice

X-ray and UV radiation from the flare ionized the upper layers of Earth’s atmosphere, producing a moderately-strong blackout of shortwave and low-frequency radio signals over North America. The North American blackout is subsiding now. An even deeper radio blackout is still underway around both of Earth’s poles. This is due to solar protons and electrons being funneled into the polar regions by Earth’s magnetic field. A blackout map from NOAA shows the geographical distribution of the radio disturbances. Solar flare alerts: text, voice 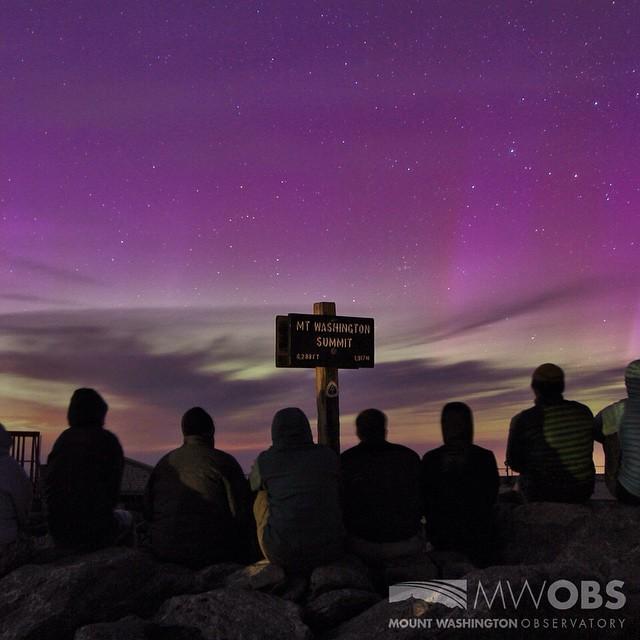 HAPPY SOLSTICE: Tomorrow is the longest day of the year in the northern hemisphere, and the shortest day in the south–that is, the “June solstice.” The exact moment of the solstice is Sunday, June 21st, at 12:38 pm EDT (16:38 UT). This marks the beginning of summer in the north and winter in the south. Happy solstice!

CELESTIAL TRIANGLE: When the sun sets tonight, go outside and face west. You will receive a beautiful lesson in geometry. Venus, Jupiter, and the crescent Moon have converged to form a scalene triangle in the sunset sky. In the Adirondack mountains of New York, artist Sally J. Smith created a special sculpture to frame the conjunction:

“The skies cleared here in time for me to set up this ‘planet portal’
I had made just for the occasion,” says Smith, who creates environmental sculptures
like this one at her outdoor studio in Wadhams, NY.

After this weekend, the Moon moves away from the planets–but the show won’t be over. Venus and Jupiter will continue to converge, drawing ever closer to one another until June 30th. On that night, the two planets will be a jaw-dropping 1/3rd of a degree apart–less than the diameter of a full Moon.  You’ll be able to hide the pair behind your little pinky finger outstretched at arm’s length. Mark your calendar and enjoy the show!

There sure are a lot of meteorites seen lately, all over the world.  Or at least that’s what we’re told they are.  -PB

CME IMPACT, SEVERE GEOMAGNETIC STORM: Arriving earlier than expected, a CME hit Earth’s magnetic field on March 17th at approximately 04:30 UT. At first, the impact sparked a relatively mild G1-class (Kp=5) geomagnetic storm. Since then, however, the storm has intensified to G4-class (Kp=8), ranking it as the strongest geomagnetic storm of the current solar cycle. This storm is underway now. Before sunrise, bright auroras were sighted over several northern-tier US states including Minnesota, Wisconsin, Montana, the Dakotas and Washington. Marketa Murray sends this picture from Dalton Highway in Alaska:

“The auroras were insane,” says Marketa who regularly runs a photography workshop on the Arctic Circle. She has seen a lot of auroras. “I have never seen anything like this.”

This storm could continue for many hours to come as Earth passes through the turbulent wake of the CME. Stay tuned for updates. Geomagnetic storm alerts: text, voice

BRIGHT FIREBALL, POSSIBLE METEORITE FALL: On March 15th, a meteor exploded over southern Germany. The shadow-casting fireball was brighter than the full Moon and it produced loud sonic booms – a sign that it penetrated deep in the atmosphere and may have dropped meteorites on the ground. Attracted by the sounds, astrophotographer Hans Hopf of Bavaria, Germany, turned his camera to the sky just in time to capture a plume of debris twisting in the winds overhead:

“I could see the ‘smoke’ twisting and turning through the constellation Orion for more than 20 minutes after the meteor exploded,” says Hopf. “The field of view of these images is about 10 degrees. The bright star is Betelgeuse (Alpha Orionis).”

The International Meteor Organization is gathering eyewitness reports through their new online reporting tool. European readers, if you witnessed this event, please report it. Your sighting could help pinpoint the landing zone of possible meteorites.

SLIGHT CHANCE OF SUNDAY STORMS: The X-flare of March 11th might not be done affecting our planet. According to computer models, a CME propelled into space by the explosion will sideswipe Earth’s magnetic field on Sunday, March 15th. NOAA forecasters estimate a 30% chance of G1-class geomagnetic storms if and when the CME arrives. Aurora alerts: text, voice

SOLAR FLARE AND CME: March 15th began with a bang. Between 00:45 UT and 02:00 UT, a magnetic filament erupted in concert with a slow C9-class solar flare from sunspot AR2297. This movie of the eruption comes from an extreme UV telescope onboard NASA’s Solar Dynamics Observatory:

The combo blast hurled a CME into space: SOHO movie. Modeling by NOAA analysts suggests that the cloud will deliver a glancing blow to Earth’s magnetic field during the late hours of March 17th. Will there be green skies on St. Patrick’s Day? NOAA forecasters estimate a 50% chance of geomagnetic storms when the CME arrives.Solar flare alerts: text, voice

AURORA OUTBURST: Last night, March 14-15, sky watchers around the Arctic Circle witnessed a magnificent outburst of auroras. “It was utterly amazing,” reports Oliver Wright of Abisko, Sweden. “Best I’ve seen in years of night photography.” He took this picture just as the storm was getting started:

“Later, the auroras exploded and just filled the sky!” he said.

Chad Blakley, an aurora tour guide in Abisko National Park, says “I have seen some very impressive displays during all of the years that I have been living in Abisko, but this particular show was truly one of a kind.” Using a high speed camera, he captured a must-see movie which Blakley says “closely represents what we saw with our own eyes.”

Aurora outbursts are often caused by CMEs. In this case however, a CME was not responsible. Instead, the interplanetary magnetic field (IMF) around Earth tipped south. This opened a crack in Earth’s magnetic field. Solar wind poured in to fuel the display. Aurora alerts: text, voice

SOLAR RADIO BURST: For much of the past week, space weather news has focused on how sunspot AR2297 is causing radio blackouts on Earth. On March 12th the sunspot did the opposite. It unleashed a shortwave radio burst. “It was super intense–one of the strongest bursts of the current solar cycle,” reports amateur radio astronomer Thomas Ashcraft. Click on the image below to play a recording of the sounds he heard issuing from the loudspeaker of his radio telescope in rural New Mexico:

“The recording starts a little rough for a few seconds in that there was a ham transmission in progress on one channel (22 MHz) and the other channel (23 MHz) had a tiny bit of buzz,” says Ashcraft. “But then the solar burst hit and the ham voices were entirely drowned out. For the next 3 minutes, the airwaves were dominated by solar static.”

These radio sounds are caused by beams of electrons–in this case, accelerated by an M4-flare. As the electrons slice through the sun’s atmosphere, they generate a ripple of plasma waves and radio emissions detectable on Earth 93 million miles away. Astronomers classify solar radio bursts into five types; Ashcraft’s recording captured a mixture of Type III and Type V.

More bursts are in the offing. AR2297 has an unstable ‘beta-gamma-delta’ magnetic field that harbors energy for ‘radio-active’ explosions. NOAA forecasters estimate a 70% chance of M-class flares and a 20% chance of X-flares on March 15th. Solar flare alerts: text, voice

A week of solar flares at one giant sunspot

The biggest sunspot on the face of the sun in more than two decades erupted on October 26 with its sixth substantial flare in a week.

X-class denotes the most intense flares, while the number provides more information about its strength. An X2 is twice as intense as an X1, an X3 is three times as intense, etc.

Solar flares are powerful bursts of radiation. Harmful radiation from a flare cannot pass through Earth’s atmosphere to physically affect humans on the ground, however – when intense enough – they can disturb the atmosphere in the layer where GPS and communications signals travel.

A large active region erupts with a mid-level flare, an M6.6-class, in this image from NASA’s SDO on the night of Oct. 27, 2014. The region will soon rotate over the right horizon of the sun and will no longer be facing Earth.  Image Credit: NASA/SDO

The sun emitted a mid-level solar flare, an M6.6-class, peaking at 11:32 pm EDT on Oct. 28, 2014 – the latest in a series of substantial flares from a giant active region on the sun that first erupted with a significant solar flare on Oct. 19. NASA’s Solar Dynamics Observatory, which constantly observes the sun, captured images of the event.

NASA’s Solar Dynamics Observatory captured this image of an X2.0-class solar flare bursting off the lower right side of the sun on Oct. 27, 2014. The image shows a blend of extreme ultraviolet light with wavelengths of 131 and 171 Angstroms.  Image Credit: NASA/SDO

X-class denotes the most intense flares, while the number provides more information about its strength. An X2 is twice as intense as an X1, an X3 is three times as intense, etc.

Continuing a week’s worth of substantial flares beginning on Oct.19, 2014, the sun emitted two mid-level solar flares on Oct. 26 and Oct. 27. The first peaked at 8:34 pm EDT on Oct. 26, 2014, and the second peaked almost 10 hours later at 6:09 am EDT on Oct. 27. NASA’s Solar Dynamics Observatory, which constantly observes the sun, captured images of both flares.

Solar flares are powerful bursts of radiation. Harmful radiation from a flare cannot pass through Earth’s atmosphere to physically affect humans on the ground, however — when intense enough — they can disturb the atmosphere in the layer where GPS and communications signals travel.

M-class flares are one tenth as strong as X-class flares, which are the most intense flares. The number provides more information about its strength. An M2 is twice as intense as an M1, an M3 is three times as intense, etc.

The series of flares over the course of the previous week all erupted from a particularly large active region on the sun, labeled AR 12192 – the largest seen on the sun in 24 years. Active regions are areas of intense and complex magnetic fields that are often the source of solar flares.

Active regions are more common at the moment as we are in what’s called solar maximum, which is the peak of the sun’s activity, occurring approximately every 11 years.

What is a solar flare?

For answers to this and other space weather questions, please visit the Spaceweather Frequently Asked Questions page.

› Download high resolution media from all flares from AR2192
› What does it take to be X-class?
› View Past Solar Activity