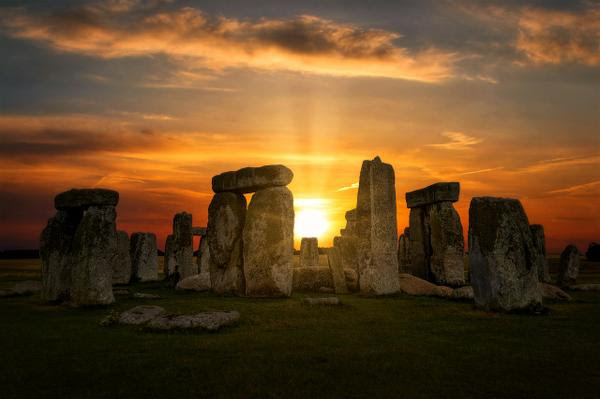 Your weekly guide to planetary influences

AS WE JOURNEY through 2020, it seems that every week brings a deepening of the process of transmutation. Everywhere we look, the systems and structures that we once relied upon for stability are in disarray, and even chaos.

The old forms that are falling apart were created from blueprints that are of a lower vibration. For humanity to evolve – and perhaps even for us to survive – we must create new blueprints that are drawn from the higher frequencies, and then we will need to use those blueprints to create the new forms. We have much work ahead of us, work that will begin in earnest with the Jupiter-Saturn alignment in Aquarius in December.

But, we are primarily at the dismantling phase right now, which can raise a lot of uncomfortable emotions. And yet, it is the depth of the feelings that are being raised that is opening the space for the change that must occur.

HUMANS are a unique species in that we are able to feel so deeply. Many times, we might wish it were not so! We wish we could experience the ups and downs and not feel such extremes of emotion (or at least, not the lows). But our wide emotional range is part of living in this dualistic reality. Not all species have our ability to soar both so high and so low, and other dimensions do not necessarily have the great contrasts that we experience.

It is said that the height of love and compassion we can know is equal to the depth of grief that we can feel. That’s why it is up to each of us to understand, accept, and then release the darker, denser emotions, and then to move into a higher vibrational response. When we take the spiritual responsibility to do this, we not only elevate humanity, we also benefit the entire universe.

THE PRESENT UPHEAVAL is – not surprisingly, for those of us who live and breathe astrology – reflected in the current motions of the planets. I wrote last week about the Pluto-Eris square that perfects today, June 14, and how this aspect is connected with the COVID-19 crisis and the need for humanity to see the results of actions taken selfishly, without considering longer-term outcomes, and without concern for nature and all forms of life.

Pluto-Eris can also be seen in the increased urgency to correct other forms of injustice – those perpetrated by a hierarchical society that disrespects certain members of its population. Many of the reactions that are triggered right now arise from the anger and resentment developed over centuries of unfair treatment. Both Pluto and Eris are known to bring such feelings to the surface.

We are dealing with a very contentious influence as these two dwarf planets push against each other, and yet we can see higher purposes for this energy to be coming forward now. Humanity needs course corrections in so many areas of its expression. As a society, we’ve mostly ignored earlier, more subtle wake-up messages from the universe. The compounded planetary events strewn throughout 2020 are designed to do far more than just nudge us.

MERCURY begins a new retrograde period this week, coming to a standstill and starting to move backward at 9:58 p.m. PDT on Wednesday, June 17. While it might seem that lately we’ve been doing little else besides going inward and reflecting, whenever Mercury goes retrograde, it encourages us to do just that.

Mercury has been in Cancer since May 28. Although emotions were certainly already tender by that date, Mercury in Cancer indicates a time when our thoughts and communications are especially colored by our feelings. And, while we always want to take our feelings into account when making decisions, we should note that during Mercury retrograde, we may not think as objectively or clearly as we usually do.

But, this retrograde Mercury in Cancer period, through July 12, is perfect for delving into history, for deepening our understanding of our personal and shared past. We can use it constructively in meditation, to help us understand our motivations, and to locate and release emotional or mental patterning that is of a lower vibration. We can also use the heightened sensitivity of Mercury retrograde in Cancer to enable us to relate to and empathize more fully with others.

NEXT SUNDAY, we have the potent combination of the Solstice and a Solar Eclipse occurring almost simultaneously. The Sun enters Cancer (the moment of the Solstice) at 2:43 p.m. PDT on Saturday, June 20. The eclipse perfects just 9 hours later, at 11:41 p.m. PDT.

A Solstice sets themes for the coming season, giving us clues as to how the next three months will unfold. Having an eclipse at the Solstice is a powerful sign of deep transformations occurring now through September.

This is also a North Node eclipse, with the Sun and Moon (00°21′ Cancer) within two degrees of the North Node (29°07′ Gemini). A North Node eclipse indicates a major push on humanity to resolve old karmas and take its next steps into a more evolved future.

HAVING the eclipse in Cancer conjunct the Gemini North Node puts an interesting twist on the event, since we need to combine the themes of both signs in our interpretation. Cancer is devoted to home, to family, and to emotional security. It rules the nurturing/protective principle, which can turn into aggressiveness if the mama bear feels her babies are threatened. Cancer also rules the past, our ancestors, and historical influences.

Gemini disseminates information. It tells stories and reveals truth. It is the sign of both the teacher and the student. With the North Node in Gemini and the South Node in Sagittarius, our next step of evolution depends on our ability to move from judgment, self-righteousness, and dogmatism to acceptance, tolerance, and impartiality; from racism, discrimination, and partisanism to thoughtful and open-minded consideration of others’ perspectives; and from gullibility and fanaticism to rational, impartial questioning.

We could imagine that with these two signs linked through the eclipse, stories from the past could come forward to inform us, to inspire us to create new futures that are in alignment with those higher qualities of the Gemini North Node. This is, after all, a New Moon eclipse, which indicates an opportunity for a major new beginning.

THIS SOLAR ECLIPSE, occurring in the first degree of a cardinal sign, also activates what astrologers call the “Aries Point.” When a planetary event triggers the Aries Point, it tends to coincide with actions that have far-reaching effect. These events may happen around the time of the eclipse itself, or within the next six months, which is often the time frame during which we see the greatest impact of an eclipse.

Next Sunday’s Solar Eclipse, and the Lunar Eclipse on July 4-5 (which is conjunct the Sun of the U.S. chart), are repeats of eclipses that occurred 19 and 38 years ago. The Lunar Eclipse also repeated 57 years ago. As we review those time frames – July through December of 2001, 1982, and 1963 – we can certainly recall significant events that affected many people, and even changed the course of history.

I’VE BEEN BUSY working on the slideshow and calendars for my “Transmutations & Rebirth” webinar on June 25 – and am eager to share it all with you! The class will cover the last six months of 2020, which promise to be just as life-changing as the first six months have been.

with a link to the calendars. The ZOOM link and all other emails about the webinar will also come from that “noreply” address. Please make sure this address is whitelisted in your address book so that these emails don’t land in your junk/spam folder, or get stopped by a firewall.

To learn more about the class, please read on! And remember that you don’t have to attend live – everyone who registers rec

eives a replay link by email after the class airs.

(Note: “If your birthday is this week” follows the webinar information.) 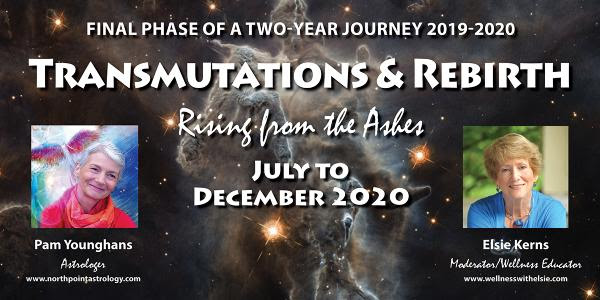 Transmutations & Rebirth: Rising from the Ashes

Astrological forecast for July to December 2020

Airing LIVE and Recorded for Replay on Thursday, June 25

WE ARE ENTERING the final phase of an incredibly transformational two-year journey that began in early 2019. As promised, the first half of 2020 has been exceptionally powerful, driven by the Saturn-Pluto alignment in January. These energies were then magnified in March-April as Jupiter and Pluto aligned.

The end of June promises to be yet another significant time, with a dynamic Solar Eclipse on the Solstice (June 21) and the second Jupiter-Pluto conjunction on June 29. With so much going on during the last 10 days of June, it’s the perfect time to explore the meanings of all we are experiencing, and to take a look ahead.

To start this webinar, we’ll talk a bit about current energies to get our bearings and to set the stage for what comes next. We’ll then dive into what the planets reveal about the remainder of 2020. Here are just some of the transition points that we’ll explore in depth:

I hope you can join us for this webinar! And, if you can’t attend live on the day of the event, no worries – the webinar will be recorded. The replay link will be sent to all registrants.

To register, please visit https://newpamjuly2020.eventbrite.com. Once you register, you’ll receive confirmation and follow-up emails from @eventbrite.com.
IF YOUR BIRTHDAY IS THIS WEEK: In the coming year, you will find the desire to be of service deepening within you. In order to accommodate that desire in a healthy way, you will likely need to figure out how to maintain your boundaries, so that you do not fall into self-sacrifice. Your challenge is to follow your heart’s calling to assist those in need, without believing that you can rescue them, or must martyr yourself in the process. Also, let go of the judgment that you should or could be doing it “better.” For those whose solar returns occur near the Solar Eclipse (on June 19, 20, or 21), this is an especially powerful year to make a new start, based in a more complete understanding of your truth and of your core needs for fulfillment in life. (Solar Return Sun square Mars, quincunx Saturn, square Neptune, conjunct North Node)

In Gratitude and Light, 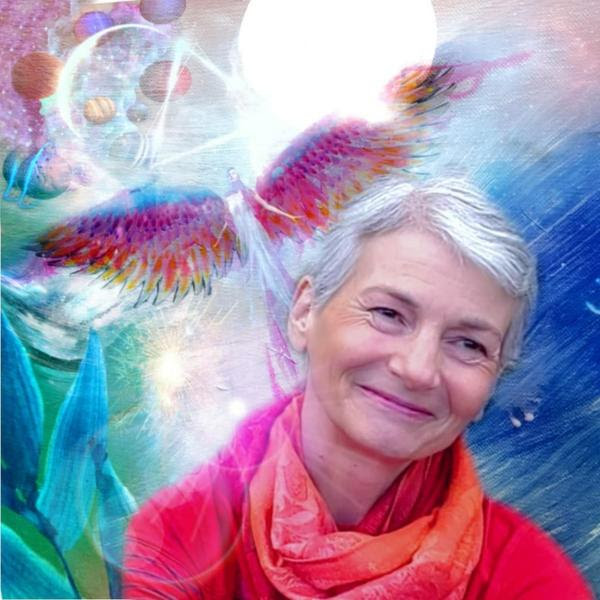 About the NorthPoint Journal

Astrologer Pam Younghans writes this NorthPoint Journal based on planetary influences and insights received. Her hope is to offer perspectives to assist you in utilizing current energies to enhance your life experience and accelerate your spiritual and personal growth.

Feel free to share this issue of the NorthPoint Journal with others who may enjoy it! When doing so, please forward it in its entirety, including all contact and copyright information.
To learn more about private astrology sessions with Pam, please visit the “Personal Readings” page at www.northpointastrology.com. To schedule a reading, please email pam@northpointastrology.com.