‘CoupGate’ – A Localized Civil War Is Now Underway In The DoJ

A miasma of consternation lay heavy across the Potomac swamp late last week when former FBI Acting Director Andrew McCabe was let off the hook for lying to his own bureau while, elsewhere across DC, the distinguished Lt. General Flynn was still fighting for his life against exactly the same charge after three years of dilatory maneuvers by the DOJ to conceal their prosecutorial malfeasance in the case… and then the sketchy Roger Stone matter entered a twilight zone of jiggery-pokery that appeared to climax in a staged ruse by his four prosecutors to lure the Attorney General, Mr. Barr, into a trap.

You are forgiven for failing to follow all the twists and turns in this latest installment of what might now be called CoupGate, a summation of the seditious campaign to overthrow the president, which already has gone through so many gates — SpyGate, RussiaGate, MuellerGate, UkraineGate, WhistleblowerGate — that Mr. Trump looks like he’s spent three years training for the giant slalom in the next winter Olympics. A localized Civil War is underway in the Department of Justice now. Mr. Barr is in the middle, getting it from both sides.

The AG has apparently partitioned the DOJ into two separate realms: the now-identified corps of coupsters working desperately to keep their asses covered in an unraveling conspiracy, and Mr. Barr’s group attempting to account fairly for all that has happened, while salvaging what’s left of the outfit’s institutional legitimacy. Too much documented evidence of crime is out there in the public domain to dismiss these activities as a “conspiracy theory.” The trouble is, so many were involved from so many branches and agencies, that fully prosecuting every angle of it could bring down the permanent bureaucracy like the Jenga tower it has become.

The decision to let Mr. McCabe skate on the lying rap infuriated those demanding accountability for government lawyers-gone-wild, since even the DOJ Inspector General, Mr. Horowitz, cited serial instances of his “lacking candor” in more than one report, and “Andy” seems to have been a pivot-man for the FBI in the early-and-middle phases of the coup — along with his DOJ counterpart, former Deputy Attorney General Rod (“I’ll wear a wire”) Rosenstein.

I have a theory about the McCabe case: The Attorney General has taken the rinky-dink “lying to the FBI” charge off the table. It has become a liability, virtually the emblem for government misconduct, and Mr. Barr is getting rid of it in these matters. It has already caused too much mischief, insulted Americans’ sense of justice, and damaged the DOJ’s standing. Note, Andrew McCabe has been let off only on this charge, stemming from only one particular IG referral; he may well yet be liable for more serious charges-to-come. From here on, there will be no more rinky-dink lying charges against any of those implicated in the coup, only the most serious charges, and only those that add up to a solid case. 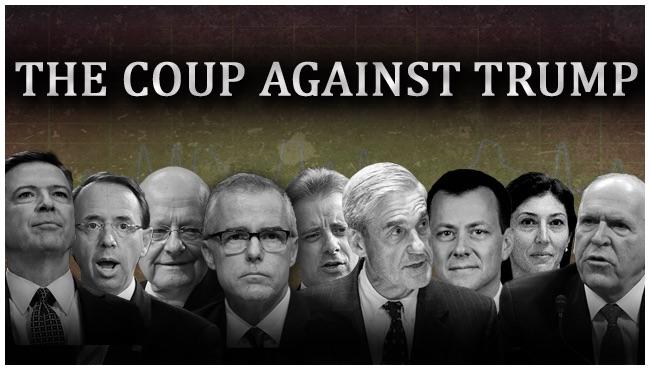 NEVER MISS THE NEWS THAT MATTERS MOST

The coup has been so broad, deep, and thick that I predict cases will have to be brought under the RICO statutes in batches for different groups in separate agencies and branches of government.

There is gang from the State Department who helped engineer UkraineGate, including former Ambassador Marie Yovanovich, former Sec’y of State John Kerry, and others. There is that big herd of rogue lawyers in the DOJ and its stepchild, the FBI, the names widely disseminated by now, Comey, Strzok, Baker, Boente, Carlin, Clinesmith, et. al.

There’s another a band of seditionists in Congress that includes Mark Warner of the Senate Intel Committee, the now notorious idiot Adam Schiff over in the House, and staffers who worked for both.

There’s a bunch in the Pentagon’s Office of Net Assessment that paid over a million dollars to Alternate International Man of Mystery (actually, CIA asset) Stefan Halper to run entrapment schemes against people working for Mr. Trump.

And finally, there is the 800-pound-gorilla over in the Democratic Party thicket, namely Hillary Clinton, and those connected to her and her charity fraud, the Clinton Foundation, which is the real and actual predicate for the whole sordid affair — a list that includes Viktor Vekselberg of Russia’s Skolkovo Project, $25-million donor Russian oligarch Victor Pinchuk, Russian aluminum magnate Oleg Deripaska, and Dmitri Alperovich of CrowdStrike, (Russian collusion, anyone?) as well as rascally freelancers such as Christopher Steele, Glenn Simpson of Fusion GPS, lawyer / Lobbyist Adam Waldman, and Hillary errand boys Sidney Blumenthal and Cody Shearer. The stories behind those names are all over the web, in case you want edify yourself.

Now, perhaps, you can see the scope of this big hot mess, and deduce the degree of difficulty that William Barr faces in attempting to set it all straight. He has to carefully select those who will be charged and probably not bother with some of the bit players. The charges are going to have to be serious, and the cases must be strong. It is a gigantic job of work, and rather delicate business considering the explosive potential to a government whose credibility is already pretty shredded. Failure to attend to it may turn a mere bureaucratic civil war into a genuine citizen rebellion featuring some of the 300-million-odd firearms at large in the republic.

I believe Mr. Barr is aware of what’s at stake and will behave honorably.