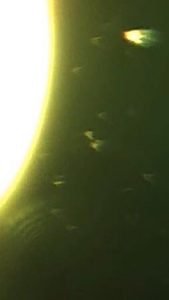 ” …CIA sources connected to the secret bases in Antarctica say the sudden surge of activity in the intelligence community was related the sudden closure last week of seven solar observatories. In particular, the sources say:

“The Solar Observatory in Sunspot, New Mexico has been ‘observing’ the sun since the Roswell incident. They belong to a special off-the-grid group known as “The Watchers.” There are several of these special observatories strategically placed around the planet.

“The Cabal Deep State is backed up against the wall. They are grasping for feathers now. They went in and grabbed everything out of fear and panic. Gag orders have been issued.

“We don’t know the final play yet. This may turn against them and be used as the main act of the Disclosure Event.”

The MI6 source said the observatories were shut down because they wanted to carry out a more orderly disclosure process in order not to cause panic or misunderstanding “among the surface population.”

In any case, this may be related to a huge surge in UFO sightings around the planet recently. Below are links to two examples reported in traditional media outlets: