There has been a lot of talk recently in the mainstream media about the potential discovery of Planet X, or Planet Nine, as they call it now:
http://www.sciencemag.org/news/2016/01/feature-astronomers-say-neptune-sized-planet-lurks-unseen-solar-system
https://en.wikipedia.org/wiki/Planet_Nine

Although this is NOT yet the official discovery of Planet X, it is a step in the right direction. This is part of the soft disclosure process currently taking place. The Cabal has been suppressing their knowledge about the existence of Planet X for decades. You might want to know that Chimera-controlled Maui High Performance Computing Center (MHPCC) intercepts all data gathered by all major astronomical observatories around the world and erases all data that might lead to direct discovery of Planet X:
https://en.wikipedia.org/wiki/Air_Force_Maui_Optical_and_Supercomputing_observatory

Eight years ago, Japanese scientist Patryk Lykawka has published a scientific paper which predicted the existence of a hypothetical planet that is very close to the real Planet X in its orbital characteristics:
http://allesoversterrenkunde.nl/!/!/actueel/artikelen/_detail/gli/the-mystery-of-planet-x/

Of course, his paper did not receive international press coverage as the current Mike Brown’s announcement did, because it was far too close to the truth. 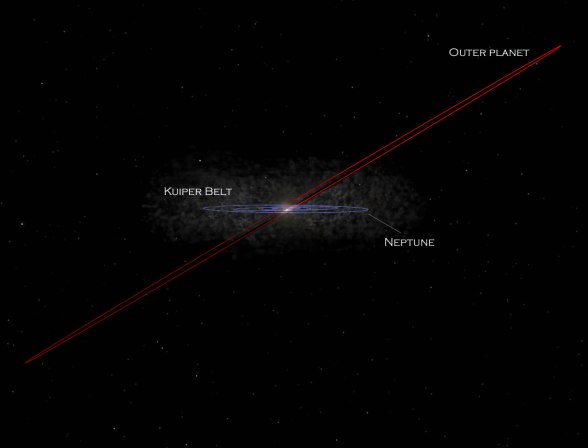 Just to refresh your memory, here are the characteristics of the real Planet X, given to me by the Pleiadians:
Radius: 7,500 km
Mass: 0.76 Earth masses
Semimajor axis: 70 AU
Inclination: 40 degrees
Eccentricity: 0.25
Planet X has a rocky core, a mantle of water ice and thin surface layer of frozen methane. If a space probe would visit Planet X from a distance, it would find a silvery bluish surface with large sections of smooth terrain and patches of geologically dynamic surface with signs of cryovolcanism. If that probe would come close enough for the resolution of its cameras to exceed 10 meters per pixel, it would discover curious rectangular highly reflective features on some parts of the surface. These are the glass ceilings of the subsurface bases of the Resistance Movement and the Galactic Confederation fleet.
And, if you haven’t guessed already, Planet X is NOT Nibiru.
Posted by Cobra at 3:17 PM  comments: